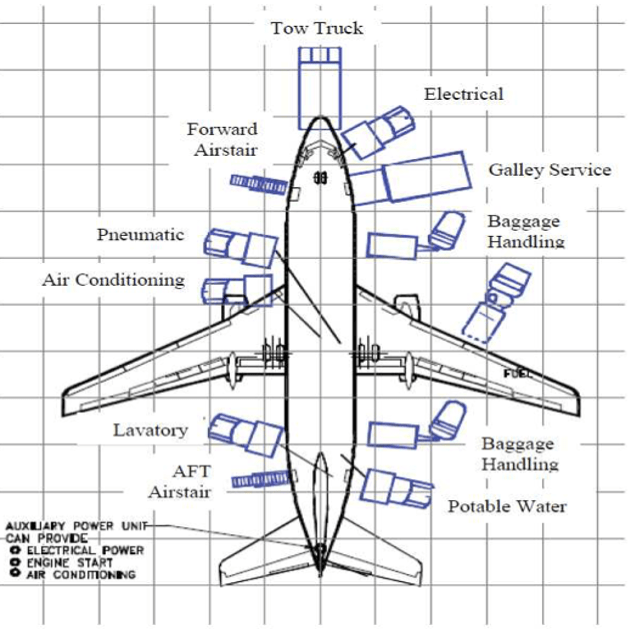 This type of contract is used typically to regulate services provided by ground companies to vectors. Those services may be both “airside” or “landside”, whether they refer to flight operations on ground nearby the airport, or to other ground services.

IATA worked on SGHA to help companies identifying those services and make standard rules, inspired by praxis in force in world’s airport.

What are those services? Handling companies (which provide services) offer to vectors various services, like aircraft cleaning, refuelling, passengers and luggage assistance. In fact, Handling companies manage all the activities on ground linked to operations of boarding and disembarkation.

But the most important activity we are interested in for this topic is the goods/luggage managing, and what happen in case of loss, destruction or damaging of goods. The variety of activities provided in force of handling contract generated discussion about his nature and legal qualification; this is important to identify, because it can change the company liability in case of luggage/good damaged or lost.

Firstly, for the Italian laws, handling contract can be viewed as an air transport contract. All the handling operations are accessories to the main contract of air transport. That means that in case of lost or damaged of goods or luggage, handlers are auxiliaries of vectors, who is responsible for their behaviour (art. 1228 Italian Civil Code).

On the other hand, handling contract can also represent a deposit contract (art. 1766 Italian Civil Code); the particularity in this case is that the contract is stipulated between handler and vector, but it goes in favour to another subject, the passenger or addressee of transport. In this way, is the handler who is responsible for damages when it receives the goods.

This interpretation is supported by art. 18 of Warsaw Convention (then replaced by Montreal Convention), which also helps identifying the moment when handler’s liability starts:

Even though this second interpretation seems more suitable, as we said before the various activities and operations involved in handling and the characteristics of this contract determine difficulties in the classification of the contract.

In fact, there has been several interpretations by Italian courts on this topic; the lack of a common and clear interpretation made necessary the intervention by United Sections of Supreme Court in 2017 (Cass. Sez. Un. n. 21850/2020).

The sentence stated that handling contract take shape of transport contract, and deposit in favour of a third person contract is not suitable: the main reason is that the sender or the passenger has no relation or contact with handler, but only with the vector. That means that no actions can be moved from the sender/passenger directly against the handler: he can only ask for compensation to the vector.

Anyway, handler is considered by Supreme Court as an auxiliary of vector, and is responsible only in case of intentional or culpable fact of good loss/damage, by art. 2043 Italian Civil Code (responsibility for illicit), not for a contractual responsibility.

The clause that we are most interested in is the 8th, about liability. It states that “Except as stated in Sub-Articles 8.5 and 8.6, the Carrier shall not make any claim against the Handling Company and shall indemnify it (subject as hereinafter provided) against any legal liability for claims or suits, including costs and expenses incidental thereto, in respect of:

(a) delay, injury or death of persons carried or to be carried by the Carrier;

(b) injury or death of any employee of the Carrier;

(c) damage to or delay or loss of baggage, cargo or mail carried or to be carried by the Carrier, and

(d) damage to or loss of property owned or operated by, or on behalf of, the Carrier and any consequential loss or damage; arising from an act or omission of the Handling Company in the performance of this Agreement unless done with intent to cause damage, death, delay, injury or loss or recklessly and with the knowledge that damage, death, delay, injury or loss would probably result”.

This is the latest version of the document (the 38th), of 2018, and it replaces the 2013 version. In this version there are some important news, regarding, for example, audit pools and claims.

First of all, there is a new clause, the 3.3, that states “The Carrier shall not perform self-handling on the services which the Handling Company has agreed to provide by virtue of this Agreement, except in such special cases as shall be agreed between the Parties”. The aim is to protect handling companies from the possibility that flying companies decide to do handling operations by itself, assigning “in-house”.

The second main addiction is the one at article 5, where are indicated at letters A and B of art. 5.3 the documents to look at in case of absence of instructions from the Carrier, in order to apply the best practices and procedures. In the same section, it has been added the new articles 5.9: “The Carrier or a regulatory authority governing the Carrier’s operations may, at its own cost, and with reasonable prior notice, audit the designated services in the applicable Annex(es) B. Such notice shall contain a description of the area(s) to be audited. The Handling Company shall cooperate with the Carrier and will undertake any corrective action(s) required. If the Carrier participates in any of the IATA audit pools, the Handling Company shall accept an audit undertaken by another carrier if done under the umbrella of the pool and for the benefit of the entire pool. The auditing company or auditing person shall be agreed by the Carrier and the Handling Company.”

At the article 7 there is one of the most important addition, as the principle “no payment-no service” is introduced. In fact, now handling companies can suspend their services if airline company fails to pay; they can also ask for immediate prepayment or cash in case of insolvency of the airline company.

Talking about payment, there is another modification linked to that, at articles 11.11 and 11.13, where are stated terms for modification of payment and minimum wage.

Other addition refers to the period when vectors can make indemnity claims for cargo damages (art. 8.6). These claims must come within two years from the expiration of the time limit set by art. 31.2 of Montreal Convention.

Amongst the addition, it has to be mentioned the reference to data protection in art. 1.1. Data protection is not explicitly regulated, but it is only mentioned in the compliance check-list of the art. 1.1, giving to it the same level of attention of anti-bribery and anti-competition.

Those are the main innovations in the latest version of SGHA. As said, this document is a more a guide that needs implementation depending on the necessities of various companies. SHGA collects all the best practices, to give vectors and handler a baseline for the regulation of their deals. A useful tool in a subject that take place all around the world, under different legislations.